How to play 24 channel audio by motu sound card

Hello!
I want to use PsychPortAudio to play sound in 24Ao Motu sound card. we have 24 Speaker and we want to play mono sound in one speaker anytime. I know ASIO is supported by Motu, and find Motu in asioseetings(), when install ASIO4ALL. I find 24 output channels through WASAPI and MME and WDM in PsychPortAudio(‘GetDevices’). but when in pahandle = PsychPortAudio(‘[Open][, deviceid][, mode][, reqlatencyclass][, freq][, channels][, buffersize][, suggestedLatency][, selectchannels][, specialFlags=0]); set the deviceid to WASAPI or WDM id num, we have error and when set to MME id we can use two channel.
may matlab version is R2020a and psychtoolbox is 3.0.18.

You need to provide more information. What error? What (exact) operating system+version?

when used asiosettings we can see MOTU PRO Audio OUt1-24 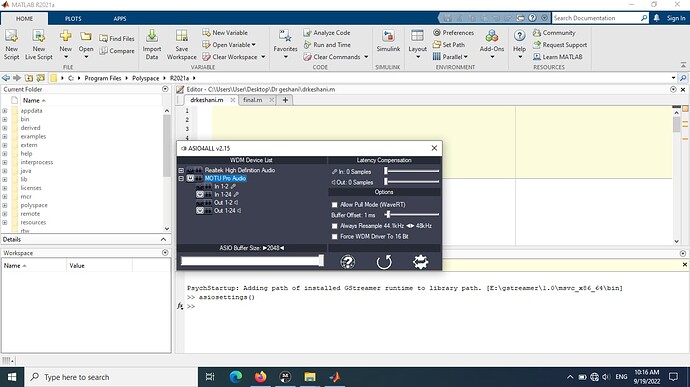 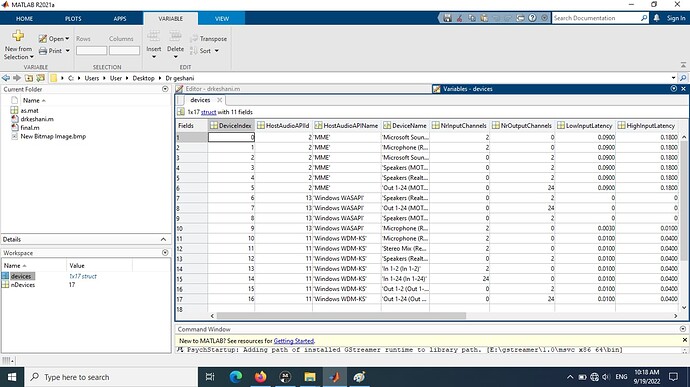 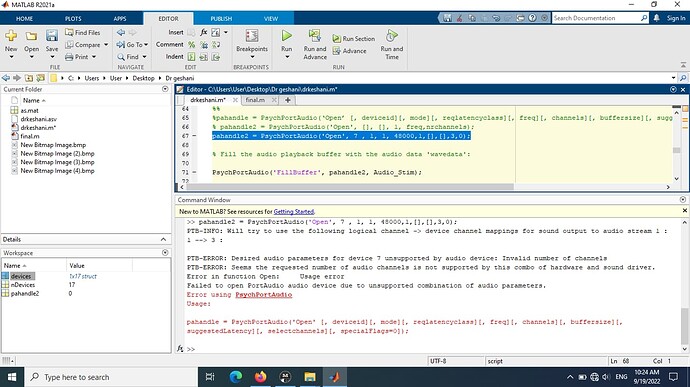 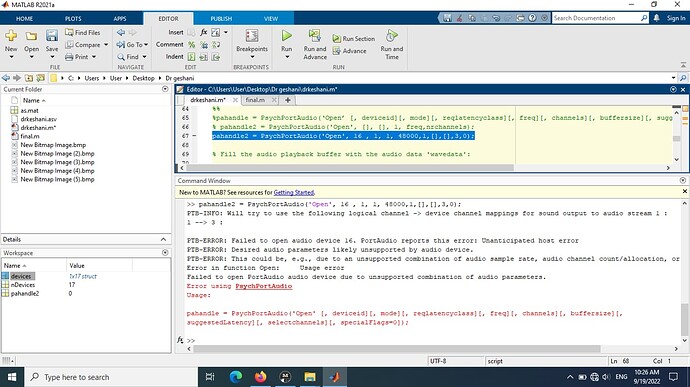 Congratulations, due to it being of general enough interest, your issue has been selected by myself for “free support on resolving a non-trivial issue”, sponsored by Mathworks Neuroscience - MATLAB and Simulink Solutions - MATLAB & Simulink - You get advice for free that would normally have cost your lab in excess of 1000 Euros. Mathworks provided us with 3 such “Jokers” for free support and you get to use the first out of three.

I’ve spent a couple of hours looking at this, and these are my findings of why your approach didn’t work and what one could do about it. Skip over this section if you want to get to my advice of what you should probably do instead of trying to fix your current approach:

Because it isn’t supported on Windows with MME, DirectSound or WDM-KS audio backends, the parameter there is silently ignored and does not have an effect. On Linux it isn’t implemented either and would be silently ignored at the moment.

So that’s why you can open a sound device under MME or WDM-KS, but channel 1 is always used, as the parameter does not have an effect.

Under WASAPI, the situation is more complicated:

To summarize, use of selectchannels, although it looks elegant, has multiple problems, which make it probably not the right approach to solving your problem:

Also, if you wanted to change the output speaker on a trial-by-trial basis in your experiment, calling PsychPortAudio('Open') and PsychPortAudio('Close') every trial makes for a complex script and lots of overhead. Open is meant to be called infrequently, ideally only once per session during experiment script startup.

A better solution which should work exactly the same on any operating system and sound card, with low overhead is to use PsychPortAudio audio slave devices instead:

A new demo in a future PTB beta release will demonstrate this. For now you can get the demo from this link:

This mechanism allows mixing and independent control of many parallel sounds, with independent channel assignments, start/stop times, schedules, AM modulation envelopes etc. Examples of use of such audio slave devices are to be found in BasicAMAndMixScheduleDemo.m' or BasicSoundScheduleDemo.morBasicSoundPhaseShiftDemo.m, or TurnTableDemo.m`.

As a slight variant, you could open one slave device attached to each output speaker channel, e.g., like this, and could play sound through each speaker, e.g.,
During script startup after creating pamaster:

… later on inside trial loop, play sound for speaker i:
PsychPortAudio('Start', paout(i));
… or for speakers [1,4,5] simultaneously all starting one second from now, ie.
GetSecs + 1:

The downside of the proposed approach instead of using ‘selectchannels’ is that our driver always has to drive all 24 channels of the hardware, even if only outputting 1 channel mono sound, causing a potentially higher system load, because all mixing and remapping is done internal to PsychPortAudio, not by the audio hardware. However, modern computers are fast, and shouldn’t break a sweat for, e.g., 24 channels. I tested some of this on machines over ten years ago with 64 channels and it wasn’t an issue.

Btw. Psychtoolbox does not support ASIO™ [Disclaimer: “ASIO™ is a trademark and software of Steinberg Media Technologies GmbH.”] out of the box anymore, the reasons for this are explained in “System Requirements” on our Website. Therefore ASIO4All will have no effect, neither will any other ASIO driver, and ASIO remains inaccessible by a standard Psychtoolbox setup. However, as your MOTU card likely comes with native ASIO drivers, you wouldn’t need ASIO4All for that card, as it is meant to implement a best effort “fake ASIO” on incapable sound hardware.

That said, your debug output tipped me off to a way you might be able to use at least basic ASIO under modern Matlab + PsychPortAudio without the need for PsychPortAudio / Psychtoolbox to actually implement support for it. Some Matlab compatibility fixes will be in an upcoming Psychtoolbox 3.0.19 release to allow PsychPortAudio to use the portaudio.dll provided by Matlab itself. However, this doesn’t really change recommendations for your specific use case, as using audio slave devices is a better solution.

Hello
Dear Mario
I was very surprised. The solutions were excellent. I used all of them.

I appreciate your swift reply.

Good. Mathworks will be pleased their money didn’t go to a waste.

Did you also successfully try opening you 23Ao with the DeviceIndex=8 for the “Speakers (MOTU…” device with NrOutputChannels == 2? Would be interesting to know how MOTU fares there, even though the method with the audio slave devices is the recommended one for your use case.